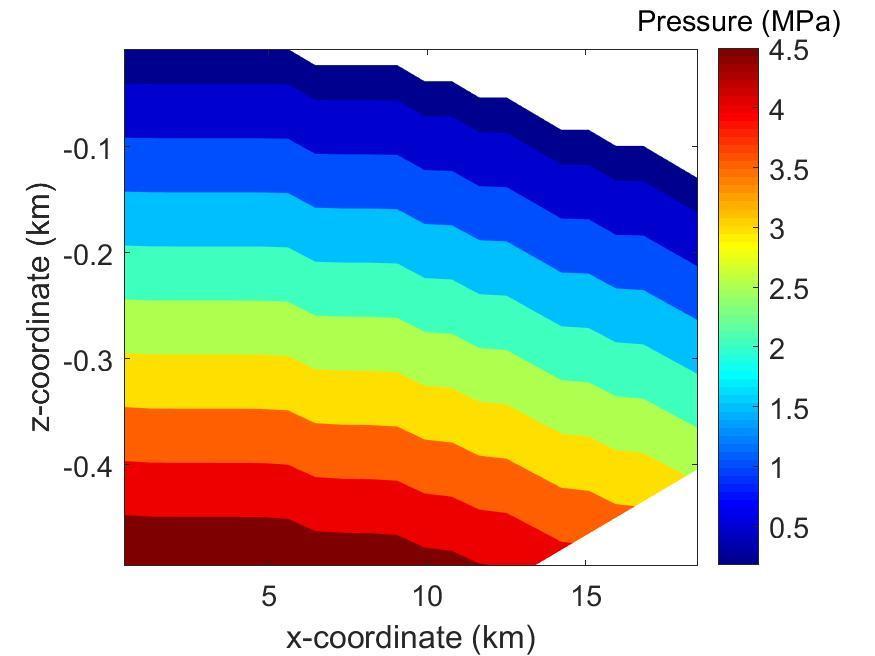 I am using iTOUGH2-ECO2N to investigate upwelling of CO2-laden brine into a shallow aquifer system, but I am having a problem with the initialization of the flow model and would appreciate some help figuring out how to solve it. I am using a 2-D grid, with two layers representing two aquifers that are flat for a while before sloping upward toward the ground surface.

To set the top boundary as a sloped water table (constrained by previously estimated head distributions in the aquifers), I replaced the nodes above the water table elevation with a single water-saturated element that I set to have a large volume, a small nodal distance, and an atmospheric pressure. The left boundary was likewise set to a constant hydrostatic pressure distribution via large-volume, small-distance water-saturated nodes. The other two boundaries were no-flow, as justified by the local geology.

When I run this simulation for a long period of time, I get a pressure distribution that makes sense, and a head distribution (calculated as pressure minus elevation-times-specific-weight-of-water) that also makes sense, given that I'm trying to establish flow from left to right by implementing the sloped water table at the top. These pressure and head distributions are shown in Figures 1 and 2 attached.

However, in order to maintain the pressure conditions that I prescribed, the code calculates significant alternating fluxes into and out of the top boundary, as is shown in Figure 3. While the net water flow rate out of this boundary matches with the total inflow from the left boundary (shown in Figure 4), the alternating fluxes at the top have significant unwanted effects on transport within the system. This is exemplified by the very "jagged" salt plume that forms when I introduce salt and water sources along part of the bottom of the domain, as shown in Figure 5.

The fluxes seem to be related to the head drops that occur at each "stair step" along the sloped top boundary, so I refined the mesh to make these stair steps half their original size, but still got significant alternating fluxes (up to ~25 g/s, as opposed to a maximum of ~30 g/s in the first simulation).

Any help solving this problem would be greatly appreciated!

Thank you in advance,